At least 17 people have been killed and several others injured when a passenger plane of Indian airline Air India crashed while landing at the airport in the southern state of Kerala's Kalikut city, officials said. The crash happened at 7:41 p.m. local time, with 184 passengers and six crew members on board, including ten children. The death toll from the plane crash is expected to rise. Authorities say most of the passengers have been evacuated and at least 35 injured have been taken to hospital. The crashed Air India Express Flight IX1344 arrived at Quikode Airport in Calicut from Dubai on Friday evening, and according to an Air India spokesperson, the plane skidded off the runway because of bad weather.

The Indian news agency ANI quoted the Director General of Civil Aviation as saying that the plane could not stop on the runway during landing and crashed in the valley. He also said that when the plane landed at the airport, the visibility was very low. Remember that the runway of Quikode Airport is located on a hill. An investigation into the crash has been ordered, according to civil aviation officials.

Indian Prime Minister Narendra Modi lamented the accident and tweeted, "I hope the injured will recover soon. I have contacted Kerala Chief Minister Pina Rai Vijayan about the situation and the authorities are on the scene and providing assistance to the victims.

Pakistan's Prime Minister Imran Khan also tweeted about the plane crash in the Indian state of Kerala and expressed his condolences to the families of those who killed and injured in the crash. 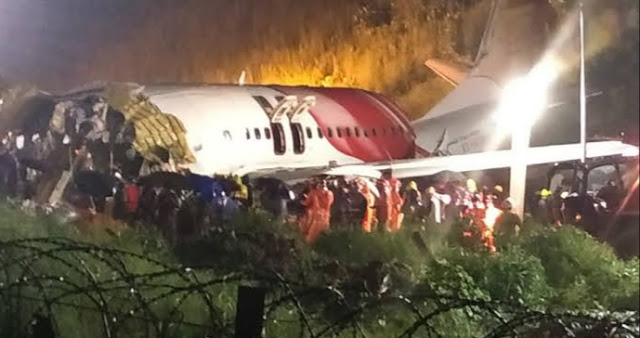