An explosion at the port of Sussex, dark clouds of black smoke rose into the sky.

Sussex (August 08, 2020) An explosion at the port of Sussex, dark clouds of black smoke rose into the sky. According to the details, clouds of black smoke rose from the New Haven Industrial Unit which caused trouble to the residents. Rescue operations have been launched immediately after the cloud rose. According to a report by a foreign news agency, locals have been instructed to close their doors and windows while staying at home, while several firefighters are engaged in putting out the blaze. Eyewitnesses say they heard a loud explosion just 1 mile from the port. The East Sussex Fire and Rescue Service said 12 fire engines were on the scene on Beach Road, but no injuries were reported.

"The fire in New Haven is heavy and the wind is not very good, so be careful," said local councillor Sean McLeod. A spokesman for the East Sussex Fire and Rescue Service said: "We have 12 fire engines in New Haven. The fire is affecting the industrial building. No injuries were reported. Please avoid the area. However, further announcing this, the locals have been instructed to close the doors and windows of the house while several firefighters are engaged in putting out the fire.

Sussex Police wrote on Twitter: "As we deal with a large fire in New Haven, our colleagues are recommending that doors and windows be kept closed if you live in the area and avoid if you are planning a visit." "We know the weather outside is hot, so the fire and its effects could be more damaging, so people are asked to stay indoors and close their doors," officials said. And keep the windows closed. 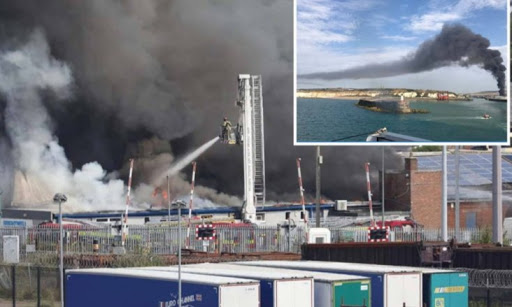