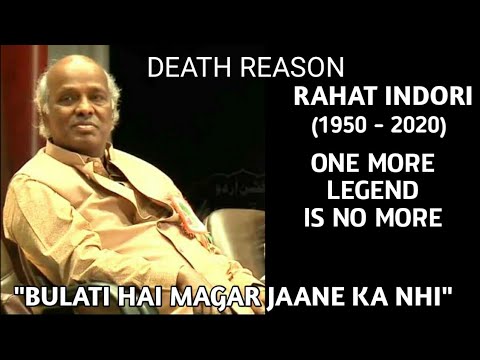 Popular Urdu poet Rahat Andori of India has passed away today at a hospital in Indore, Madhya Pradesh. According to local Bhopal-based journalist Shri Niazi, 70-year-old Rahat Andori was admitted to the hospital with difficulty breathing due to corona virus and died at the hospital due to heart failure. Dr. Vinod Bhandari of Orobando Hospital in Indore told ANI that he suffered two heart attacks on Tuesday and could not be saved. Dr. Bhandari said that he had 60% pneumonia.

Rahat Andori wrote on Twitter on Tuesday morning about being infected with the corona virus. His death was also reported from the same account on Tuesday. This tweet was probably made by his son. The tweet said, "Rahat Sahib passed away at 05:00 this evening due to heart failure. Pray for their forgiveness.

Rahat Andori had earlier written on his Twitter account on Tuesday morning, "My corona was tested yesterday when the initial symptoms of COVID appeared." Her report has been positive. Admit to Orobando Hospital, pray I get rid of this disease as soon as possible.

Ehte Andori was born on January 1, 1950. He completed his higher secondary education at the Notan School in Indore and after graduating from Islamia Karimia College there, he did his MA from Barkatullah University.