While the Corona epidemic has had a profound effect on the global health system, the virus has also hit the economies of most countries, and now even prosperous countries are worried about their spending. A clear example of this is the oil-dependent Arab countries, especially Saudi Arabia.

Relations between Pakistan and Saudi Arabia and the economic situation in Saudi Arabia have been hotly debated on social media these days. The talk started with a statement by the Foreign Minister of Pakistan on Kashmir. Pakistan's Foreign Minister Shah Mehmood Qureshi said in a program on private TV channel ARY, "I am telling this friend today that Pakistan's Muslims and Pakistanis who are ready to die fighting for your integrity and sovereignty Today, they are asking you to play the leadership role that the Muslim Ummah is expecting from you.

Explaining the word 'otherwise' in one of his sentences, Shah Mehmood Qureshi said, "This is my point of view. If not, I will tell Imran Khan that the ambassador of Kashmir can no longer wait. We have to move on,” With or Without “

When the host asked, Would Pakistan participate in conference “ With or Without”  Saudi Arabia? Shah Mehmood Qureshi paused and replied 'With or Without”

Ayesha Farooqi, Spokesperson of the Pakistan Foreign Office, said that the people of Pakistan have high expectations and hopes for OIC due to our long standing relations with the organization and its member countries. To a question, he said that the statement of Foreign Minister Shah Mehmood Qureshi reflects the sentiments and aspirations of the people of Pakistan. Pakistan's foreign office has called the foreign minister's statement on TV part of its policy.

Former Foreign Secretary Shamshad Ahmad Khan told that what Shah Mehmood Qureshi said, was 100 per cent correct, Arab friends have not sided with us on the Kashmir issue.

To understand Pakistan's anger, it is important to look at some of Saudi Arabia's economic woes before discussing other issues.

Saudi economic difficulties: Demand for repayment of loans from Pakistan

Speaking to a news channel  on condition of anonymity, finance ministry officials confirmed a report in local media that Saudi Arabia had demanded the repayment of 1$ billion loans to Pakistan. After which Pakistan took a loan from China and handed over the money to Saudi Arabia.

Saudi Arabia recently planned to boost tourism to reduce its dependence on oil revenues and eased visa requirements for many countries, but then the Corona epidemic closed the tourism sector. ۔Before the Corona virus, Saudi Arabia was known as a tax-free country, but now it has announced an increase in value-added tax from 5% to 15% and the monthly housing subsidy has been abolished. Apparently, the decision was made following a reduction in government revenues by up to 22% following the fall in global oil prices. It should be noted that there are currently 2.6 million Pakistanis living in Saudi Arabia in Riyadh, Dammam, Taif and Jeddah and other areas who are involved in various occupations there. But most of them are labourers.

On Kashmir dispute, Respond to the statement regarding Saudi Arabia.

When the PTI government came to power, it was Saudi Arabia that signed investment agreements and approved a relief package to alleviate Pakistan's economic woes. To achieve this, Prime Minister Imran Khan himself had to visit Saudi Arabia. Later, Saudi Crown Prince Muhammad bin Salman visited Pakistan. Then the time turned and change things. While reconciling Saudi Arabia and Iran, the situation now is that the Pakistani Foreign Minister has given an ultimatum to Saudi Arabia to take a clear position on the Kashmir issue.

Former Foreign Secretary Shamshad Ahmad Khan, while sharing his experiences, said, "who is not with us on Kashmir, cannot be with us. The Arab countries are proud only because of their oil revenues but they have no idea of Pakistan's sacrifices and how we have damaged relations with Israel and Iran because of them.

Leader of the Opposition in the National Assembly of Pakistan and President of the Muslim League-Nawaz, Shahbaz Sharif termed the statement of the Foreign Minister regarding Saudi Arabia as irresponsible. According to him, Saudi Arabia has supported Pakistan in every hour of need. He said the nation was concerned about the government's relationship with Saudi Arabia and its style of expression. He demanded an apology from Saudi Arabia and that matters be dealt with wisely and efficiently.

The first lesson to be taught in international relations is that national interests are important. Other factors play a secondary role while there is no permanent friend or enemy in these relations However, Saudi Arabia is among the two or three countries that have been exempted from the rule. From the very beginning of Pakistan's foreign policy, Saudi Arabia has been a permanent friend.

US analyst Michael Kigelman tweeted that this was a major development, adding that Pakistan's foreign minister was now publicly criticizing his biggest ally, Saudi Arabia, which was unusual. According to him, this situation can also be seen in the context of very important issues in the region.

Twitter users are also seen asking whether Pakistan is threatening Saudi Arabia to side with them on the Kashmir issue.

The background to this question is important because no one ever thought that relations between the two countries, which swear allegiance to each other, would go in a way that would bring other countries closer together. Instead of wishing each other or separation.

According to Dr. Najib, in order to improve our economy, we have to rely on national action, that is, we have to reduce our economic needs while minimizing our dependence on foreign aid. According to him, the fall in oil prices has severely affected the balance sheets of oil exporting countries.

Finance Secretary Naveed Baloch has not commented on the situation

Dr. Ashfaq Hassan, who has a keen eye on Pakistan's economic policy, believes that due to geo-strategic changes, different countries are now setting their own policies. According to him, Saudi Arabia is not openly supporting Pakistan on the Kashmir issue because it has trade interests with India. According to him, Pakistan has given a clear message by returning money to Saudi Arabia "without any request" that it now wants more diplomatic cooperation from Saudi Arabia in the changing circumstances than economic.

According to Shamshad Ahmad Khan, the OIC, an alliance of Islamic countries, has become a joke and has no role in the world. One country (Saudi Arabia) is leading 57 countries like sheep. According to him, Arab countries are unable to understand that Kashmir is the lifeblood of Pakistan.

According to Dr. Ashfaq Hassan, Pakistan was not agreeing to the terms of the IMF, now the demand for loan repayment from Saudi Arabia may be aimed at increasing pressure on Pakistan. 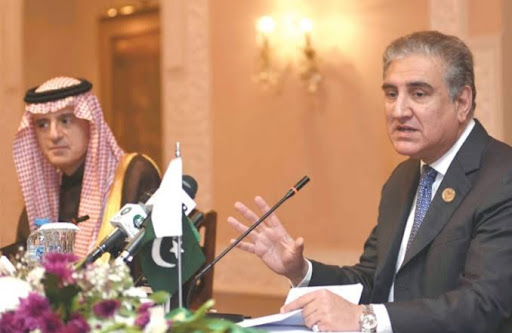