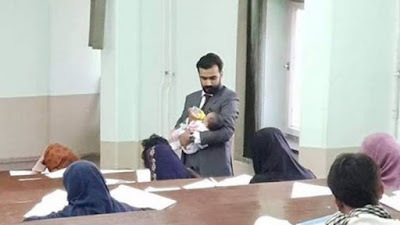 A picture has been going viral in recent days, in which a teacher is holding a child in his arms in the examination hall while all the students present there are seen solving their papers. This picture is not an ordinary picture, people are calling it the best picture of the year 2020 of Afghanistan.

This picture is actually of Kabul University. In one of the halls, the students are busy solving the exam papers. It so happened that a student had brought her four-month-old son with her but he was crying a lot, which made it difficult for the student to solve the exam paper. Instead of solving the exam paper, the student was trying to silence her child. When the teacher in the examination hall saw this scene, he came forward and picked up the child. At the same time, he grabbed the child's feeder, so that he could drink it calmly and be quiet, at the same time the student could calmly solve her paper.

Someone saved this scene in the eye of the camera. A large number of Afghans called this picture the best picture of Afghanistan this year. In which this sympathetic attitude of a teacher won the hearts of all.

When the photo went viral around the world, major media channels also interviewed the Afghan teacher in the photo. The teacher's name is Mahmood Maroon and he is working as a lecturer in the Pashto department. He says he has been receiving messages from around the world since the photo went viral, in which people are appreciating his sympathetic attitude, for which he is grateful.

Such small sympathetic attitudes on the part of teachers have a profound effect on society. Such a good attitude from an Afghan teacher proves that Afghan society is changing now. The girl students are now studying at the university level, as well as taking good care of their homes and children. which encouraging other women as well. If the teachers are good and supportive, the work and life of the students becomes easier, as exemplified by this viral image.