The difference between positive and negative thinking 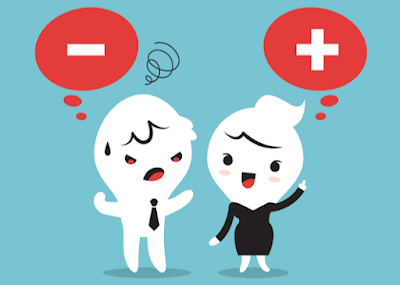 The axis of human thinking depends on society, the environment. As the society and the environment will be, so will the thinking begin to flourish. Every picture has two sides, similarly, everything has two sides. One is the positive side and the other is the negative side.

Nature has endowed man with many abilities. But man is bent on wasting his abilities. Due to which they are in decline. Developed societies are characterized by tolerance of constructive criticism, logic, argument, and freedom of thought and expression.

The question is how to get rid of negative thinking? The answer is simple, ungratefulness, jealousy, hatred, malice should be eliminated. Emphasis should be placed on training along with education. We lack training. Let the candle of knowledge be lit. Education and training should be among the priorities of our governments. The educated people of the society should be entrusted with the responsibility of moral training of the new generation and should be patronized at the government level.

Reading books plays an important role in changing human thinking. Media is an indisputable fact through which we can create positive thinking in our society. For this, we have to include good and constructive thinking people in the media.

If we want to live in a society, we have to relate to the book. We have to abandon negative thinking and adopt positive thinking. So that we can use our abilities and serve the country and the nation. We have to keep both eyes open so that we do not weep over the shortcomings of the people but keep an eye on their features. Ignore the flaws and encourage۔

Today we resolve not to interfere in anyone's personal affairs in the future and will stop Jealousy, hatred, resentment and pulling each other's legs. We will talk with logic and argument. We will not interfere in irrelevant matters. We will not take people's issues to heart. We will decide after looking both sides of any issue. We will not criticize anyone unnecessarily. Then see how develops positive and constructive thinking. Negative thinking is a torment we have to get rid of. It is licking the capabilities of our society like a termite.